Casting impregnation as a routine solution to the problem of porosity in cast metal components is gaining greater widespread acceptance within European industry, according to Ultraseal International, a global leader in the field.

A step-change in the attitude of automotive OEMs and suppliers was evident when the company exhibited at Euroguss 2016, one of the leading exhibitions for diecasters in Europe, held in Nuremberg, Germany. 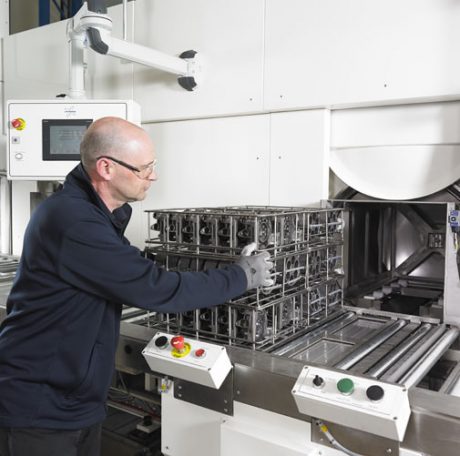 Stephen Hynes, Marketing Director of Ultraseal International, said: “Companies are increasingly approaching Ultraseal with the need for routine casting impregnation to be specified on their drawings as a standard procedure for quality enhancement.

“Casting impregnation with porosity sealants is becoming a benchmark process throughout the automotive supply chain, there was a noticeable change in OEMs’ and suppliers’ perceptions of it at Euroguss.

“Companies are recognising the cost and quality advantages of having casting impregnation incorporated as a routine quality enhancement into their production lines – especially in this age of extended warranties on vehicles.

Porosity is the name for the microscopic holes that form inside a cast metal part during the diecasting process itself. This can cause leaks and lead to problems in parts such as engine blocks that have to remain pressure-tight in operation.

Ultraseal International is a leading provider of both casting impregnation equipment and porosity sealants which together provide a reliable and permanent solution to the problem of porosity in castings.

At Euroguss 2016 it was explaining the advantages of its latest innovation, a compact, fully-automated casting impregnation machine called the R-FL-Duplex Plus which can process up to 45 units an hour and is easily integrated into a just-in-time (JIT) production line. The R-FL-Duplex Plus has transformed the traditional impregnation process by eliminating one of the three impregnation process stages, which has led to a smaller footprint and faster processing times whilst achieving world-class component sealing quality.

The R-FL-Duplex Plus takes up far less space than a conventional casting impregnation process and requires no manual handling, cutting down operating costs and overheads.

Ultraseal International has a truly global reach: it offers worldwide technical support and has a host of approvals from OEMs, has Joint Ventures in India and China, operations in the United States and Germany, an office in Japan, and a network of 22 agents/distributors and a host of OEM approvals.